Horse colic can come on fast and is life threatening to equines. Learn the signs, symptoms, prevention and treatment so you'll know what to do if your equine colics.

It is crucial that every horseman recognize the signs of colic, understand the causes, and seek veterinary treatment promptly when needed. I urge you to become familiar with the in’s and out’s of colic. I know the pain of loosing a horse to equine colic. It’s not a pretty picture.

You are Your Horse's Best Defense

Signs of Colic - Severe cases of colic often start out with very mild signs of colic that quickly progress to a very painful life threatening case of horse colic. Equine colic is an emergency.

Easy Sand Test - An easy sand test at home is a simple way to find out if your horse has sand in their gut. If your horse tests positive, you can do something about it.

Colic in Horses - It is essential that every horsemen recognize colic in horses, so they can act immediately to prevent death or permanent debilitating lameness. Get the facts now.

A Must Have for any Horse Owner 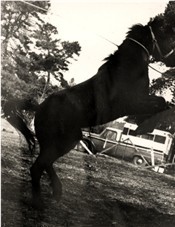 My Mother adopted a wild mustang horse from the Bureau of Land Management out of Susanville California. The mare had been captured in Modoc National Forest and was just 2 years old when she came to be with our family.

She was a true black. That is, she had a black coat and her skin was black as well. Next time you get the chance, lift the hair on a black horse and take a look at the skin color underneath. Most black horses have white skin. This horse was so black that her summer coat almost looked a deep royal blue…remarkably beautiful.

Within a year and a half this fantastic little mare was well on her way to becoming a fine horse. My Mother was riding her on trails, in traffic, in parades and even participated in a little barrel racing. But unbeknownst to us, there was a deadly killer lurking within…sand colic. 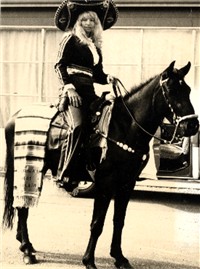 As responsible horse owners, we always took precaution to feed our horses up off the ground to keep them from eating sand and getting sand colic. The horses had free access to a salt mineral block as well. But this had not the case for our pretty little mare when she ran wild. We had no way of knowing at the time, that in the wild, she had eaten a considerable amount of black sand, most likely for the salt content.

During the 1 ½ years we owned her, the horse would occasionally show sign of discomfort. As my Mother would describe it; the look in her eye would change, as if in pain, and then quickly as it came on, it would go away. There was no regularity to these instances, often few and far between. So much so, that my Mother thought she was imagining things and dismissed it all together.

It wasn't until one fateful morning that our mare really showed signs horse colic. She was agitated and kicking at her belly. Nipping at her sides, getting up and down, anything to find escape from the abdominal discomfort that she was feeling.  Seemingly the colic had appeared out of nowhere. She was on the same diet as our other mare and we knew she had not been exposed to any feed changes whatsoever, yet her colic symptoms only worsened.

We rushed her to the vet, where they proceeded to determine the cause of this equine colic. The horse was in so much pain, that short of putting her under completely, the pain killers they were giving could not control her agony. By the time they realized the cause of her colic it was already too late.

An autopsy revealed that the little mare had eaten black sand. The heavy sand had settled down into the lining of the gut, forming a pocket. As the horse would move around, this pocket of sand would shift and twist, causing pain. The gut would right itself and the pain would go away. 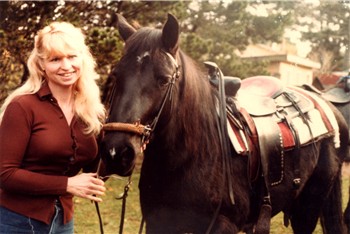 But not this time. This time the intestine twisted, and the horse rolled, and upon rolling the heavy twisted loop of intestine flipped over a neighboring piece of intestine and literally tied itself into a knot, known as a twisted gut. The gases in the gut began to build and tear the lining of her stomach open. At this point, euthanasia was the only option.

My Mother was absolutely devastated to loose her beautiful healthy 3½ year old mare to such a cruel horse colic. We don’t have black sand here in Humboldt County, but black sand is very prevalent in Modoc National Forest. Although we could not have prevented her from eating sand in the wild, we could have taken measures to remove the sand from her gut, had we known it was there, or thought to look.

As a result, we learned more about horse colic than we ever wanted to know. It is important that all of us know about signs of horse colic and its many forms. Please learn from our mistakes. I urge you to read all the pages about colic so you and your horse will never go through such pain.

Do you know someone who can benefit from this information? Please share it with them using the buttons below.

This information is written for the horseman to better understand and cope with the variety of disease and injury that can occur during the course of horse ownership. Always consult with your Veterinarian regarding the care and treatment of your equine.

Return to top of Horse Colic page to easily access the navigation bar on the left for more at Equinespot.com